Further Questions: How do you cope with hiring decisions you might not agree with?

This week we asked people who hire librarians

How do you cope with hiring decisions you might not agree with? How might this affect working relationships later on, either with current colleagues or the new hire? If a candidate you think was amazing was not hired, do you have the ability to reach out afterwards to connect them with other libraries/later openings in your organization? Feel free to answer either personally or “for a friend/colleague.”

Over the years of being on many hiring committees, I can say there will be hiring decisions you may not agree with or were not your first choice.

First rule is be gracious and accept the decision (unless you really feel an egregious and/or illegal error has been made). Don’t undermine the committee’s decision. Keep the best interest of the library in mind.

If you were on the committee, respect the confidential nature of the hiring process and don’t engage in backbiting. If it turns out that it was indeed a bad hire, learn from the mistakes to make the next hiring process better.

If you were not on the committee, realize that you might not know all the details and try not to second-guess. For example, I’ve seen awesome candidates really botch their interview or teaching demonstration. I’ve also seen amazing candidates that simply weren’t the right fit for the job that was currently available.

Welcome the person hired with open arms and do what you can to help them succeed.

If you want to reach out to the amazing candidate that wasn’t hired, do so privately. Don’t try to second guess the committee’s decision, simply assure the person of their awesomeness and perhaps look for ways to work with them in other venues, such as conference planning or joint research opportunities. If another job opens up that might be a better fit, let the person know. Simply reaching out can be appreciated.

If you were the amazing candidate that wasn’t hired, don’t give up. Don’t let it destroy your self-esteem. It can be devastating to not get the job you really wanted and felt you were perfect for (or the one you had been doing in a temporary capacity but weren’t hired for when a permanent position came open). Your particular set of talents might not have matched the skill set needed for the position. Don’t let the rejection weigh you down. Keep looking for other opportunities and refocus as needed.

If you were an internal candidate who didn’t get the job, be kind to yourself and recognize that there may be awkward moments with the new hire. Try to be as gracious as possible. It’s not the new person’s fault that you weren’t hired.

It’s a small world and you may well run into the amazing person at conferences or other settings. Greet them warmly and compliment them on their work. I regularly see people we haven’t hired doing fabulous work in other libraries. In the back of my mind I might think, “I wonder how things might have been different if we’d hired so and so?” But for whatever reason, we didn’t, so move on. 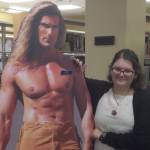 Well, let’s see. Twice at a previous library I worked at, I had strong objections to candidates who were hired. The main issue was that the candidate pools both times were poor and none of the people interviewed were really very good. I wanted to go back out and re-advertise and extend our reach (publish on listservs nationally, etc.), but both times I was overridden by my superiors who just wanted the positions filled. So, we were saddled with two librarians who were in no way prepared for the job. Both of whom, I might add, left within a year or so of their hiring-one was fired, the other was given a choice of quitting or being fired and chose to resign. I didn’t have much contact with them in the position I was in at the time, but I did try and help when I could-giving them guidance and information. I didn’t blame them, I was more annoyed at the penny-wise, pound-foolish approach management took at the time. They were more concerned with having a warm body in a seat than waiting for the right person to come along.

In my current position, I’ve been very lucky. There was one hire that I wanted, but my superiors didn’t, we talked it over and ultimately went with the hire. That person went on to be fabulous at their job, so it worked out well for the library.

As for great candidates who don’t get hired, we sometimes do internal promotions and we interview a lot of really good in-house people. It’s really difficult to pick one out a strong field of candidates, so usually what ends up happening is that we hire the best one for that position and we try to further nurture and encourage the unsuccessful internal candidates so that they can grow in our organization in positions best suited to them and their skills.

Thank you as always to our contributors for their time and insight.  If you’re someone who hires librarians and are interested in participating in this feature, please email us at hiringlibrariansquestionsATgmail.com.

Thank YOU for reading!  If you liked reading, you’re going to really love COMMENTING.

One response to “Further Questions: How do you cope with hiring decisions you might not agree with?”

This site uses Akismet to reduce spam. Learn how your comment data is processed.